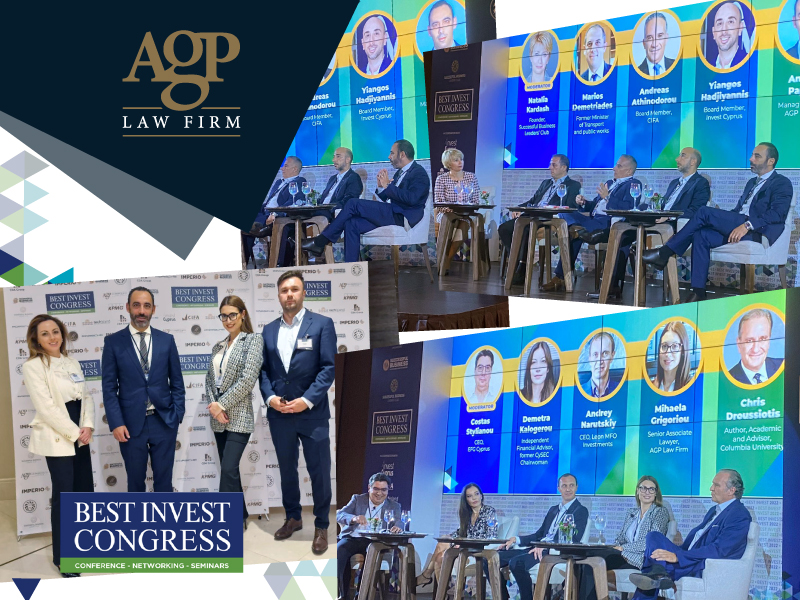 AGP Law Firm was one of the Sponsors of the Best Invest Congress on Monday October 17th, 2022, at the Four Seasons Limassol, having gathered some of Cyprus’ most influential business people.

Our Managing Partner Angelos Paphitis presented on the Panel “Cyprus: a fast-Growing Global Tech Hub – Investments in IT, Fintech and New Industry”, stating that: “The IT industry is rapidly growing in Cyprus with more and more tech-companies relocating to the island, while the Video & Entertainment Gaming industry should not be ignored which also now sets its footstep in Cyprus, being a 300-billion-dollar industry heading to an over 600-million dollar industry by 2030, being in a path of initial game offering (IGO) opportunities in an era of blockchain gaming with play-to-earn features, and despite some problems in banking and regulatory frameworks, the government and the IT industry is headed in the right direction.”

Mihaela Grigoriou, one of our firm’s Senior Associate Lawyers presented on the CySEC Regulatory Framework & Implementation of ESMA and MiCA Principles panel, stating that: “In general, Cyprus has the means and the infrastructure to support the crypto business and eventually become a crypto hub. A lot of progress has been made but we still have a few steps that need to be taken to become a jurisdiction of choice.”