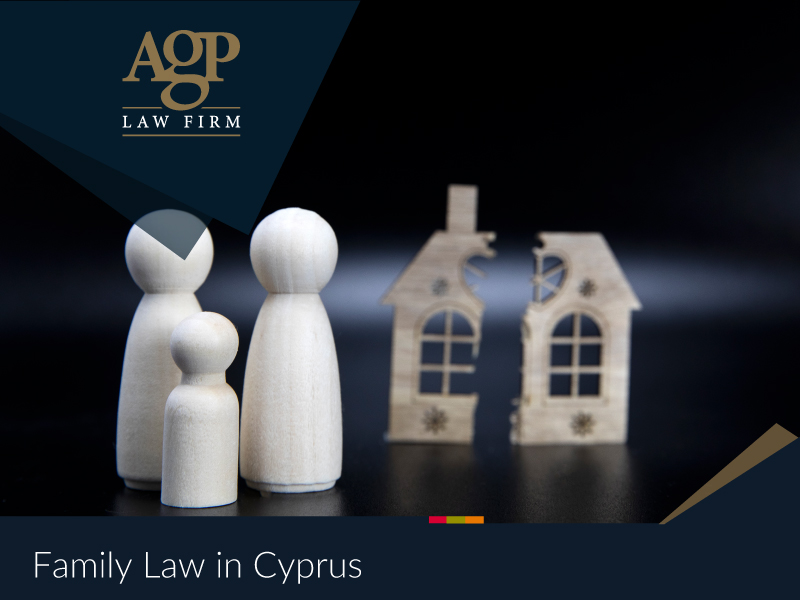 A marriage is a formal union, a social and binding contract between two individuals which unites their lives (emotionally & economically & legally). In circumstances, where the marriage and matrimonial relationship have failed or tends to dissolve, certain matrimonial disputes that arise (inevitably) must be examined and regulated by the relevant court, the Cypriot Family Court.

Further down, it will be mentioned the most prominent issues the family courts are requested to address.

In particular, the Cyprus Family Courts have the jurisdiction to hear cases involving:

Grounds for divorce are:

The Family Courts procedure regarding testimony and evidence is considered the same as in civil cases.

During separation, the Court may issue an order for the exclusive use of all or part of the property used as the main residence (family home) to a spouse regardless of who is the owner of the property.

Pursuant to Family Law, the responsibility for causing the marital shock has no effect on the rights and obligations of the spouses, therefore, several divorces are issued without the appearance of one of the two spouses, hence, it is considered a rapid procedure. Practically, a divorce application that is forwarded without any objection by the Defendant (other Spouse), can succeed within two (2) or three (3) months after being registered.

Religious marriages do not require a separate religious divorce since, on a legal basis, both civil and religious marriages are valid, therefore only by a Family Court order a marriage can be dissolved. However, a divorcee wishing to re-marry and undergo a religious marriage, may face issues if the Church refuses to marry them considering them as religiously married.

The spouse applying for divorce and raising a claim of marital shock, may fail to obtain a divorce judgment only where the Defendant (other spouse) defends the claim by not demanding to issue the divorce in their favor and only if it can be claimed that the relationship did not undergo a strong shock due to that, the issues between the spouses are minor or that the Applicant Spouse is solely responsible for the strong martial shock.

Spouses based on their power (monetary and/or capabilities) have mutual obligation of alimony. As such, during separation the Court may order the more economically stronger Spouse to pay to the other Spouse alimony.

This alimony between the spouses can continue in certain circumstances however, after the issue of divorce.

Although there is nothing stopping (practically/legally) a male spouse to file against their female partner an alimony claim, in Cyprus, it is a seldom practice. It is possible for a Court to order an interim alimony order before a notice is given and the hearing of the Defendant, if it is necessary for alimony to be paid to the spouse immediately after separation. For instance, if the spouse is not working and cannot maintain her/his self until the day of the hearing of the claim.

The spouse who has contributed to the increase of the value of the other spouse’s movable or immovable property during their marriage or before with the prospect of their marriage , is entitled to claim the part of the increase which derives from its own contributions.

The parent who does not live with the minor, will have the right of personal communication with the child.

During Court proceedings with regards to custody, care and guardianship of a minor , the appointment of a Welfare Officer for the investigation of family and other conditions for the determination for the best interest of the minor is immediately imposed.

Grandparents also have the right to communicate with the minors.

The Cypriot Courts have the jurisdiction to hear cases concerning the parental care of a minor with only the presence of the minor in the Republic of Cyprus for a few days such as e.g. holidays

Similarly, it is possible for an interim communication order to be issued before the final settlement by the Court, in order that communication cannot be ruled out.

Communication can be requested by the parent who does not have custody of the minors. Violation of the court communication decree, if done intentionally constitutes contempt of the court and it is punished accordingly.

It is important to state that, there is no discrimination of the parents based on sex as to who is preferable to exercise parental care or to have custody of the child. Besides this, many factors are taken into account such as which of the two (2) parents the child already live with or if the child is at a reasonable age their opinion is taken into account. However, it could be stated that for infants or very young children or girls the discretion of the court favors the mother while for older boys somewhat the father.

Both parents are jointly liable for the minor’s maintenance, however, each parent accordingly with his/her strengths/capabilities. This obligation may continue even after the minor becomes of age (18 years) for instance e.g. studies (university, college etc.), as such the Court may issue a temporary maintenance order until the issuance of the final application for maintenance.

According to Cyprus Law, there are provisions in place that oblige the parent to maintain (food, clothes etc) for the adult child if he/she is unable to maintain themselves.

Amounts due to be paid as a maintenance order by the Court may be collected as a fine.

Child maintenance is usually issued as an interim maintenance payment order, until the final trial has taken place. This is necessary, due to the fact that the minor must be maintained at all times.

In the interim, the court normally determines an appeasing amount to be paid as maintenance and not the amount it would possibly issue as final. Additionally, if the minor’s live with the father and the mother does not earn any incomes, there is nothing in place preventing the father claiming from the mother a contribution to the maintenance of their children.

It should be noted that presents do not amount as a maintenance payment.

The present article is a summary of the most prominent issues that arise during and on separation of matrimony. Each case is examined based on its particular facts and specific circumstances and depending on what the client demands and is entitled, as such, appropriate procedure is followed in order to protect and promote the clients’ rights.

Our Litigation department specializes and deals with Family Law issues on a regular basis.