Having a dog in Cyprus 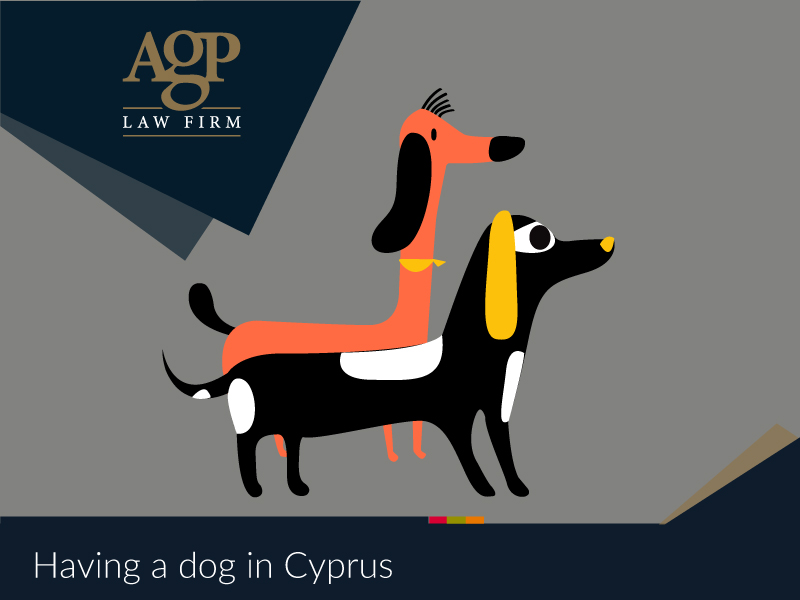 Cyprus is undoubtedly considered a pet-friendly island with established legal frameworks that protect and safeguard the health, safety and welfare of animals.

The Law 46(I)/1994, interprets the term animal welfare to denote the well-being of animals with the particular, applying to animals in captivity, domestic or animals that are under human supervision.

Accordingly, the Law expresses pursuant to section 4, that animals should be treated according to their needs. This means that pet owners need to ensure that their pets live in a healthy and safe environment that leads to the development of strong animal-human relationships. Dogs were also banned on certain beaches but it has been lifted due to a recent landmark change that was enacted in March 2020 associated to the animal legislation in Cyprus. Giving the right to dog owners to take their pets to all beaches in Cyprus, expect those that are marked as organized beaches or nature protected areas and under the condition that the dog is vaccinated. However, to avoid causing any inconvenience to others at the beach, the dog needs to be on a leash at all times and the dog owner is required to keep the dog’s health booklet with them.

Dogs Get a “Free Rein” at Parks Too

Following repeated requests for dog parks from dog owners and animal welfare activists, the Ministry of Agriculture, Rural Development and Environment had published in September 2018 that it would set up dog parks to provide open areas of animals in the congested modern cities of Cyprus. In conjunction with the Fest Department, the Ministry of Agriculture, agreed to create a special fenced area for dogs in the National Forest Park of the Pedagogical Academy.

This park would allow dogs to roam freely, without a leash, while offering them opportunities to socialize with other dogs and play. The dog park was expected to be ready in 2020. However, 2020 has brought more good news for dog owners. Several municipalities across Cyprus are working to open dog parks in cities like Limassol, Nicosia, Latsia, and more. The municipalities are investing to ensure that the parks have the right infrastructure, such as dog training equipment of international standards, agility game equipment, recreation and defecation areas and solar energy powered electricity.

Dog parks will be in:

These parks are being built away from residential areas, so as not to cause any inconvenience or nuisance for the residents. The parks will be funded, to some degree, with the fee collected for registration of dogs.

Significantly, the Law also penalizes animal cruelty and abuse. Barbaric actions such as, injure, torture, killing or general exposure to danger is punished by Cypriot Courts. The Law, provides for safeguard actions in order to prevent animal abuse and contributes to establish a safe and healthy environment for animals. As such, a person found guilty of animal abuse can be faced with fines up to €20.000 or 1 year imprisonment or both.

Pursuant to the Law, complaints regarding animal abuse should be reported to the Director of Veterinary Services, any Veterinary State Officer or any police station. Nonetheless, in a case where the abuse/torture/poisoning regarding dogs, Dog Law (184(I)/2002) utters that a report should be submitted to the Communities/Municipalities or the police or both. Furthermore, complaints can be submitted to the District Animal Welfare Committee.

Dogs are considered as one of the most popular domestic animals and are known for their loyalty, companionship, as well as the treasured services they provide for humans. Dogs are reflected as a “human’s best friend” thus, responsible ownership is vital for a healthy human-animal relationship. In accordance with Dog Law, an individual seeking to own a dog must obtain a dog ownership license before they can bring home a dog. Such license, is issued by competent authority which is the Community/Municipality and it must be renewed once a year.

It should be noted that, pursuant to the Dog Law, a visible sign “Beware of Dog” must be placed at the residence or premises where the dog/s are/is kept.

Changes in the ownership of dogs, a transfer of the license must be submitted to the municipality or local council’s office.

In case the dog is deemed deceased, the owner shall notify the Director of Veterinary Services and the police, accompanied with the required form.

Dog owners must take all reasonable measures in order to prevent their hairy friends from escaping and thus becoming stray. As such, fines will be imposed in the form of expenses incurred by the local authority for capturing and safekeeping the dog. Pursuant to subsection 10(1), the local authority shall retain the dog in a paddock for a period of 15(fifteen) days whereby taking all reasonable procedures in order to trace the owner. Consequently, in a case where the owner cannot be reached/found or the dog cannot be re-homed or is not accepted by an animal welfare organization, then the dog unfortunately will be surrendered to the District Veterinary Services to be euthanized.