Reduction of the Appealing Deadline to ECHR 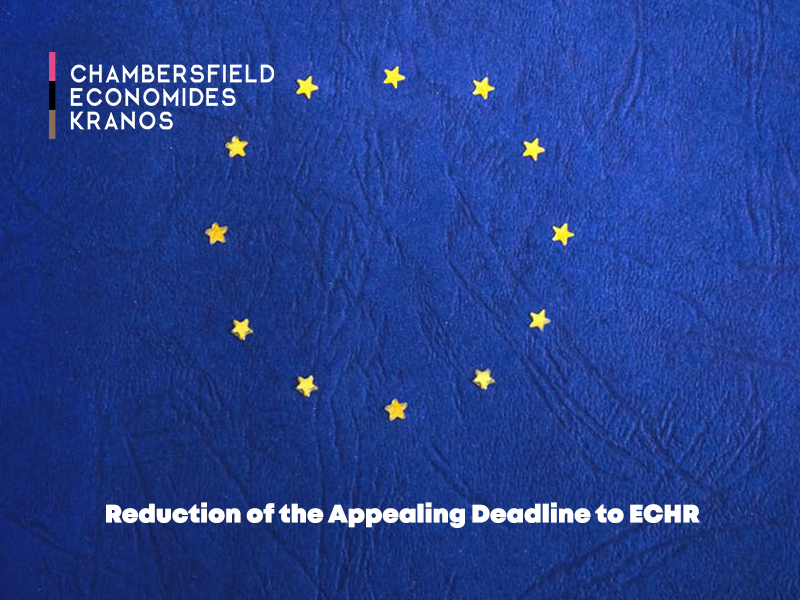 When an individual or a legal entity, wants to proceed with an appeal of a decision issued by the Supreme Judicial Authority (usually the Supreme Court or the Supreme Constitutional Court) of a country which is a Member-State of the Council of Europe, she has the right to do so on the grounds that there was a breach of her rights provided by the European Convention on Human Right (ECoHR).

The ECOHR is the Convention which binds the Member-States of the Council of Europe.
The relevant Judicial Authority for when such an appeal is sought is the European Court of Human Rights (ECHR) which is based in Strasbourg, France.

At this point, it is proper to note a common misconception about ECHR. The ECHR is the international court connected with the Council of Europe, it is independent and has no connection with the European Court of Justice, which is the Court of the European Union, and it is based in Luxembourg.

Nevertheless, following the subject-matter of this article, the ECHR has announced that starting from the 1st of February 2022, the deadline for appealing to ECHR has been reduced from 6 months to 4 months.

It is very important to note that this new change to the deadline is not retroactive: it does not apply to appeals in which the irrevocable domestic decision was taken before the 1st of February 2022. In other words, it will only apply to appeals for which the irrevocable domestic decision was issued from the 1st of February 2022 and after.

The four-month time limit for bringing an action before the ECHR after an irrevocable domestic decision is one of the admissibility criteria set out in Article 35 of the Convention. If even one of these criteria is not met, the appeal is declared inadmissible, which is why it is necessary to comply with all the requirements when submitting an appeal to the Court.

The change in the deadline for appealing to the ECHR stems from the 15th Protocol to the European Convention on Human Rights, which has been signed and ratified by the 47 Member-States of the Council of Europe. This text, which amends the Convention, entered into force on the 1st of August 2021, but provided for a transitional period before the change of deadline took effect.

Furthermore, Protocol 15 also amends the Preamble to the Convention, which now includes a reference to the principle of subsidiarity and the doctrine of margin of appreciation. The Protocol also brings about the following changes to the Convention:

The 15th Protocol had been approved back in 2013 and has been ratified by all Member-States of the Council of Europe.

Thus, the above development has brough an important and crucial development to the procedural operations of the European Court of Human Rights and all affected parties who wish to appeal a decision to ECHR based on the grounds mentioned above, must be vigilant and act within the new four-month deadline, otherwise they will lose this right.

* The content of this article is valid as at the date of its first publication. It is intended to provide a general guide to the subject-matter and does not constitute legal advice. We recommend that you seek professional advice on your specific matter before acting on any information provided. For further information or advice, please contact Mr. Christos G. Georgiou, Advocate, Mediator & Legal Consultant at the Law Firm CHAMBERSFIELD ECONOMIDES KRANOS, in Limassol Cyprus, +357 25 356 800 or email at c.georgiou@eklawyers.com, info@eklawyers.com